It’s no secret when you look through my work you are going to see a LOT of ballet! I think that when you combine passions not only do you enjoy your work and the process, but you get the best results. If there are any ballet companies out there looking for a graphic designer/ photographer *wink wink* I’m your girl!

When I got an email from one of my favorite companies, Boston Ballet, was looking for a pattern design for their Nutcracker scarf I was ready to go! Amidst being swamped with freelance work and wedding photography right now, and looking for that perfect full time job (a.k.a. a Unicorn) I settled down for a few hours and painted some Sugar Plumb’s, Nutcrackers and of course the famous bear! If my design isn’t chosen, I will probably tweak it a little and then add it to my shop. There were so many good submissions, cheers to all the artists I can’t wait to see which design wins! 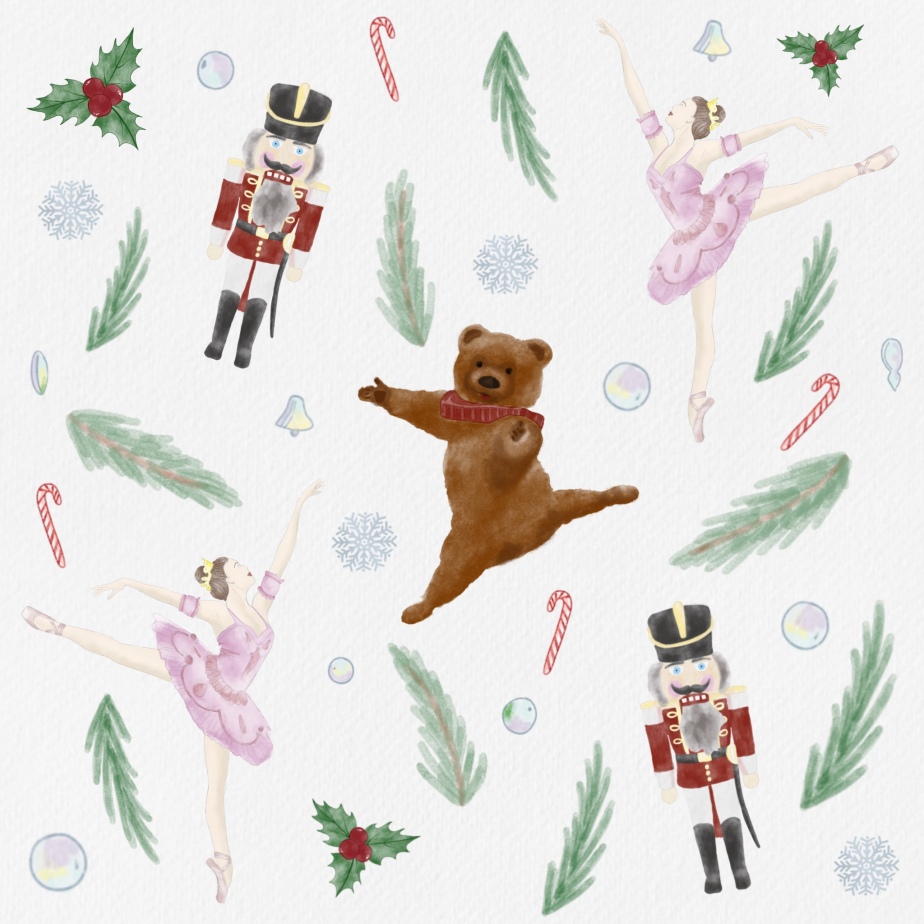 As a designer and illustrator I am always looking for ways to share my passion for art with the world and others who enjoy the same things as I do! Besides Etsy, I have now joined Redbubble.com, which is a company allowing artists to simply upload their work (easily!) and fulfill products that people purchase. While my little shop is looking kind of low on designs right now, I have plans to upload much of my art and illustration to the site! Custom orders and commissions will still have to be placed through me by emailing aliciaanndesign@gmail.com, or on Etsy.

I hope you enjoy my art as much as I enjoy making it! 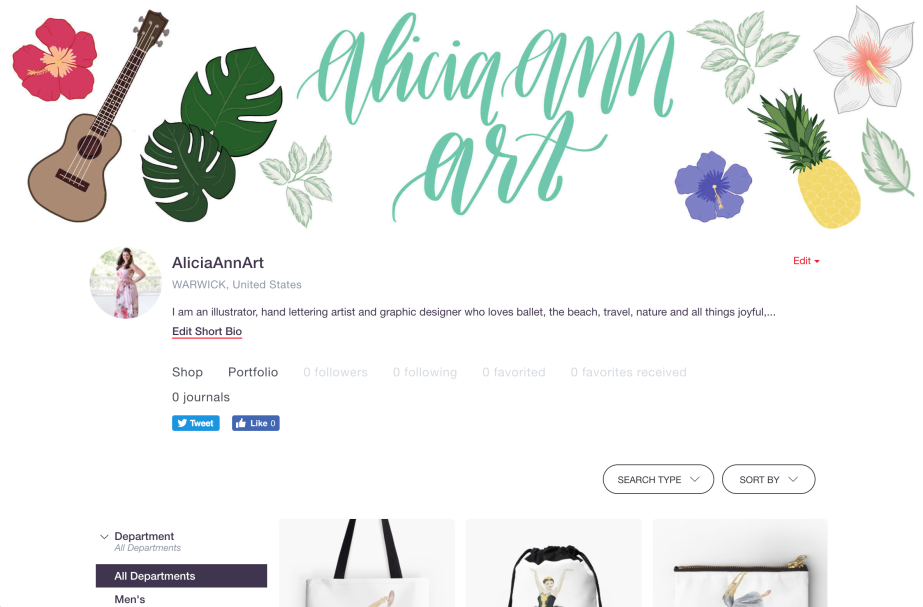 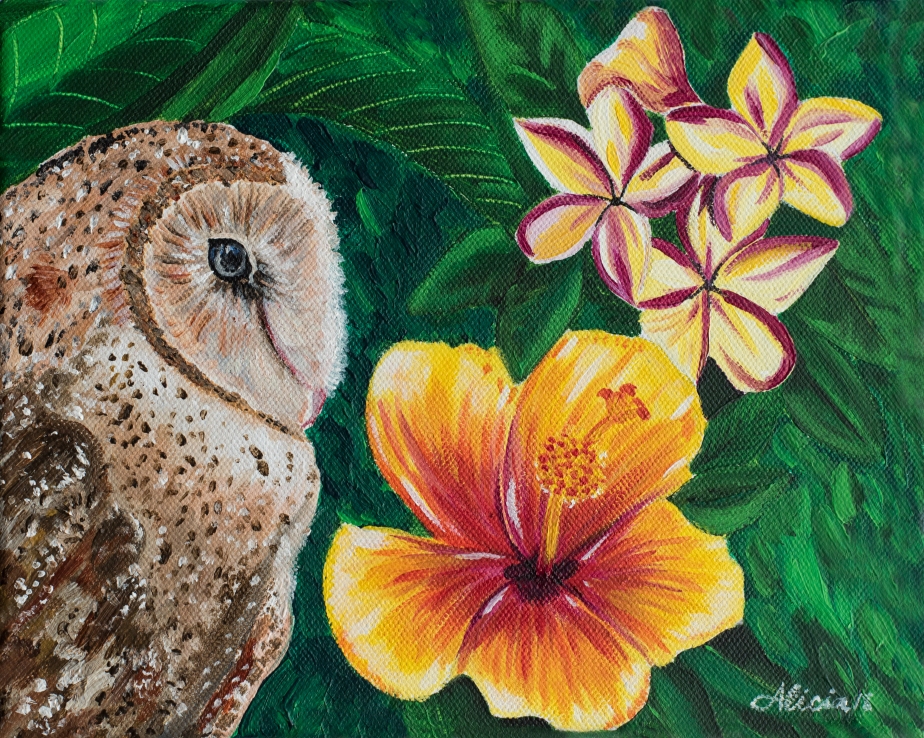 It started with a painting and my passion for playing the ukulele!

One day while practicing, I thought my older uke looked kind of dull. It was a cheaper model I had purchased before knowing how much I would fall in love with the instrument and want to continue developing my skills. I thought, what would be more beautiful than a Hawaiian painted ukulele?! Beside that, the Barn Owl is one of only TWO native owls to Hawaii and would make a perfect accomplice to my floral instrument. I started by giving the painting (above) a go on canvas, to get color palates and ideas down. With the painting being a success, I carefully moved it over to my uke by first sketching out and laying down the design.

Stay “tuned” this week for the finished project and official photos (and maybe a short video of some music)!

It’s no doubt at all that Summer and Fall are my favorite seasons! I love to get outside, go to the beach, attend farmers markets, and am inspired by the activities of the season. Theres nothing better than snacking on a ripe watermelon, or cracking open a coconut or pineapple. The latest series of illustrations and hand lettering combines the best of all of these into adorable art pieces ripe for hanging. They will be available soon in my Etsy shop! 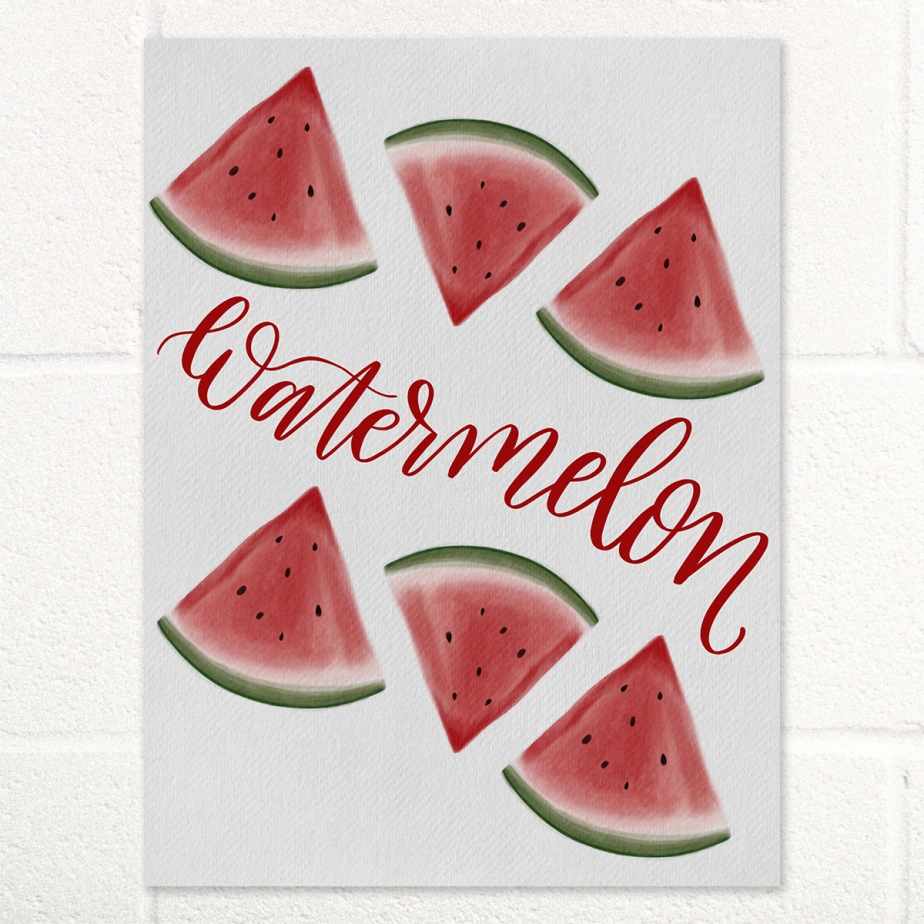 It’s no secret that I am that person that’s completely obsessed with all things Harry Potter! Countless Hedwig’s, wands, Gryffindor blankets, and POP figures flock my house and when I send something by mail I always refer to it as sending an owl (some people get it, some people look at me like I have 4 heads)!

So of course when diving into watercolor on my iPad, my first full painting had to be Wizarding World inspired! I believe in constant learning in art, design and life in general. This summer I want to strengthen my illustration techniques, and I couldn’t think of a better way than being able to paint on the go on my iPad in watercolor. After a few Skillshare classes, I took one of the works I created in class a few steps farther and Potter-ized it, and now we have “The Car? How’d it go?” 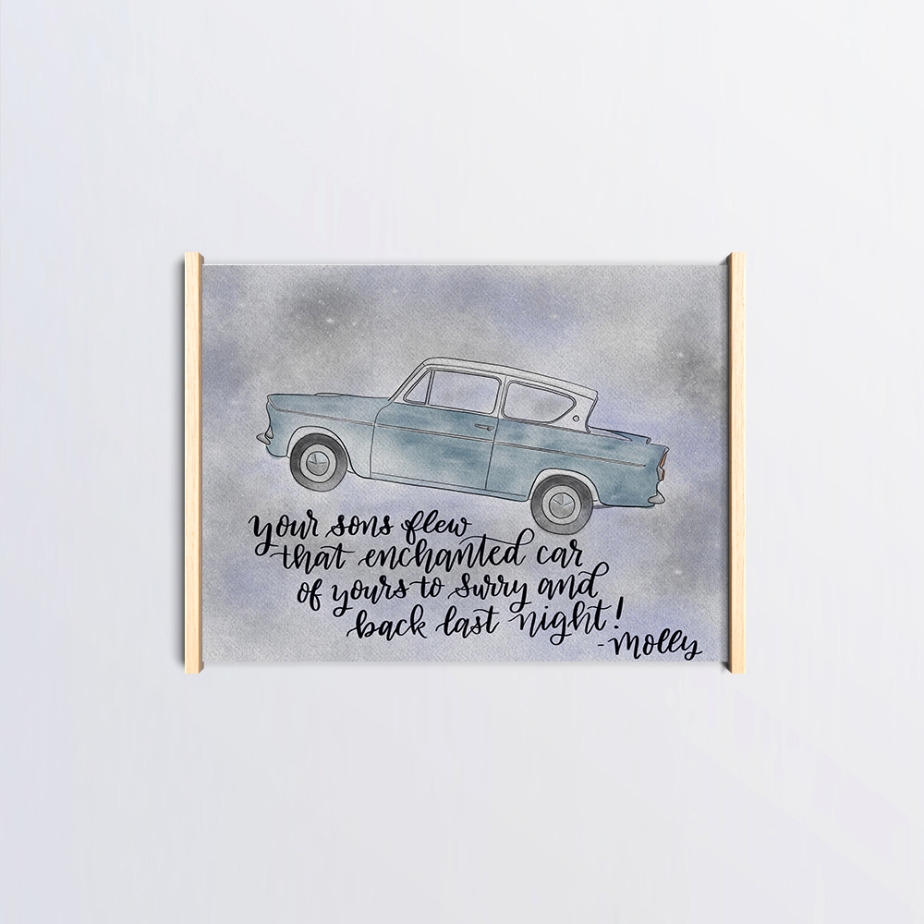 I’ve been obsessed over the culture of Harry Potter since high school. I picked up the first book while being bored at the beach with family and having nothing else to do, because my Mom’s friends son had it and I forgot reading material (this was pre-cell phones people). I was instantly immersed in the Wizarding World, and finished the book in the 5 hours or so we were at the beach. On the way home I made a stop at the bookstore, picking up all of the books that were out, eagerly awaiting the next in the series.

When I went to the Wizarding World of Harry Potter in Universal last year, I walked under the magical arch into Diagon Alley and cried. It was real. The emotion of being so passionate about a culture and lifestyle hit me like a ton of those magical bricks. Everything I read about was right in front of me. For those who get it, you just get it, and you can never get enough. You dream of shipping off to Hogwarts, and a beautiful owl delivering your letter. The world of Harry Potter isn’t just a phase, it isn’t just a “she likes Harry Potter” to me, it’s a lifestyle. It may sound odd to non believers, but the magic is there.

“After all this time”

In memory of Alan Rickman

Every third Monday in April we New Englanders get excited because it’s Patriots’ Day and the running of the Boston Marathon! When I lived in Boston for college (ok it was Newton but close enough!) the excitement in the air on this day was amazing plus there was no school or work. Unfortunately back then running didn’t mean to me what it does now, since I was just getting started and had never run a race. The summer after graduation I ran my first 5k in Worcester with some of my friends and became hooked. In those past few years I’ve run countless 5k races, a couple 10ks, the Newport 10 Miler (going again this year!) and even the Boston Half Marathon. Running is a form of therapy that proves mind over matter makes anything possible. Running is a mental and physical game. You can tell yourself in your head, you got this, breathe, push through, and you will finish.

I ran the Boston Distance Medley last year which included the 5k right before the marathon where we got to cross over that iconic finish line and experience the thrill of the crowd.

Below is the painting I made to commemorate the 2017 Boston Marathon. This race is on my bucket list and I will be chasing after my final Unicorn one day! Feel free to use this digitally for wallpaper and backgrounds. The Print will be up in the Etsy shop later today and all proceeds will go to http://bostonstrong.org/

I’ve been dying to get my hands on an iPad Pro for ages to be able to paint and draw (in bed, not going to lie haha) without having to lug around sketchbooks, paints, pencils, etc. so many illustrators swear by the iPad Pro to create content and even full works of art. So after plenty of research, I finally got the 12.9″ iPad and the Apple Pencil! Much of the first things I’ll be creating will be complete expieriments as I play with the programs like Procreate, 53 Paper and Photoshop Sketch which are my favorites so far. The pencils and inking in Procreate are awesome!!! The only struggle I’ve had so far (besides wobbly lines) is blending and retrieving previously used colors, but I’m blaming most of this on operator error. If anyone knows and good places for tutorials on iPad illustration and hacks, please let me know! Here’s my first painting!

It’s probably not the best, but much better than anything I did on my iPad mini! Since dancers and flowers are some of my favorite subject matters, expect to see plenty of those in the future. I’m excited to see where I can take my illustration now and plan on selling designs in my Society 6 store and Etsy so stay tuned!

Even though I work full time as a designer, try to stay active, and am building a photography business, I have been wanting to get back into painting both watercolor and acrylic for quite some time. My friend had mentioned she wanted to get a camera shutter tattoo with some floral designs but couldn’t find anything to reference to show me. An couple ideas came to me so I decided to paint out both of them starting with this one. Here’s the process: 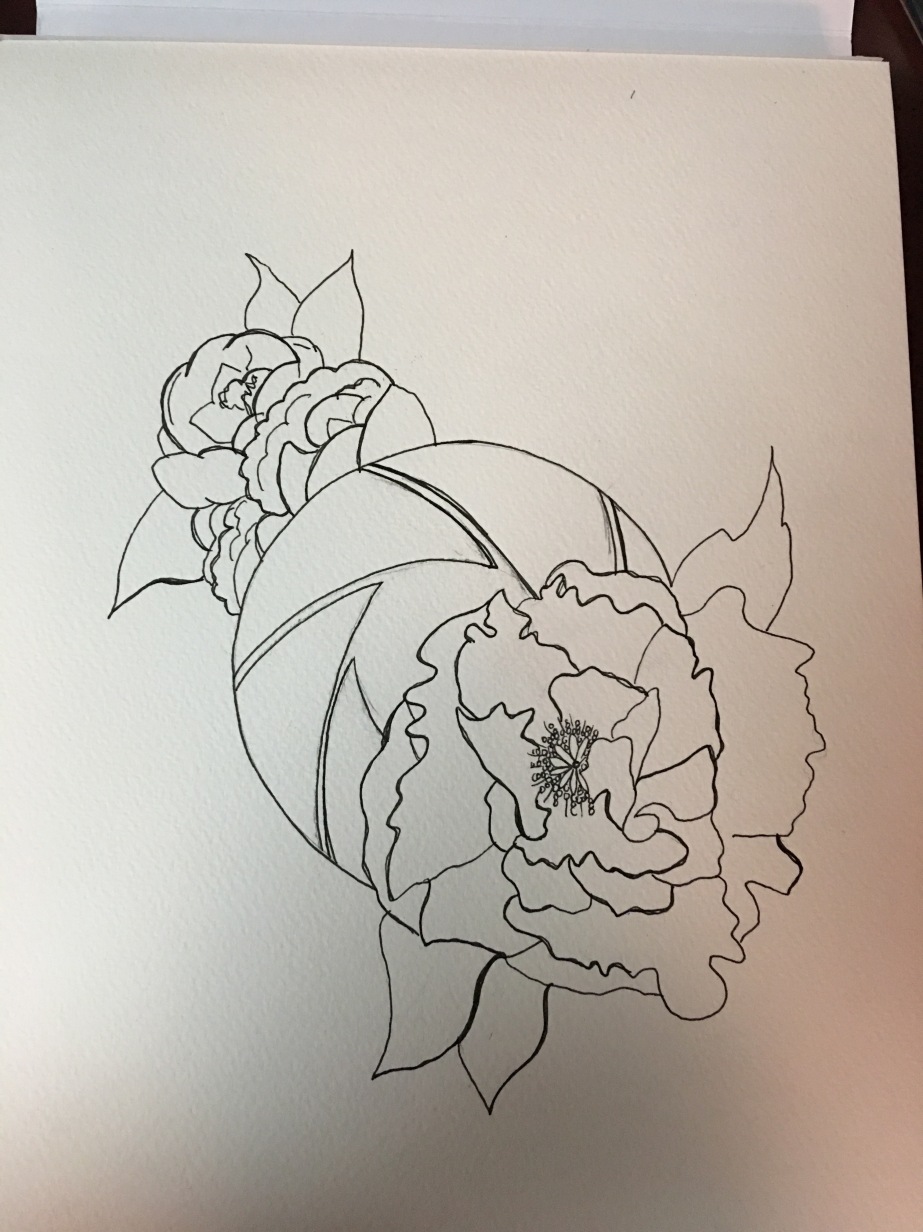 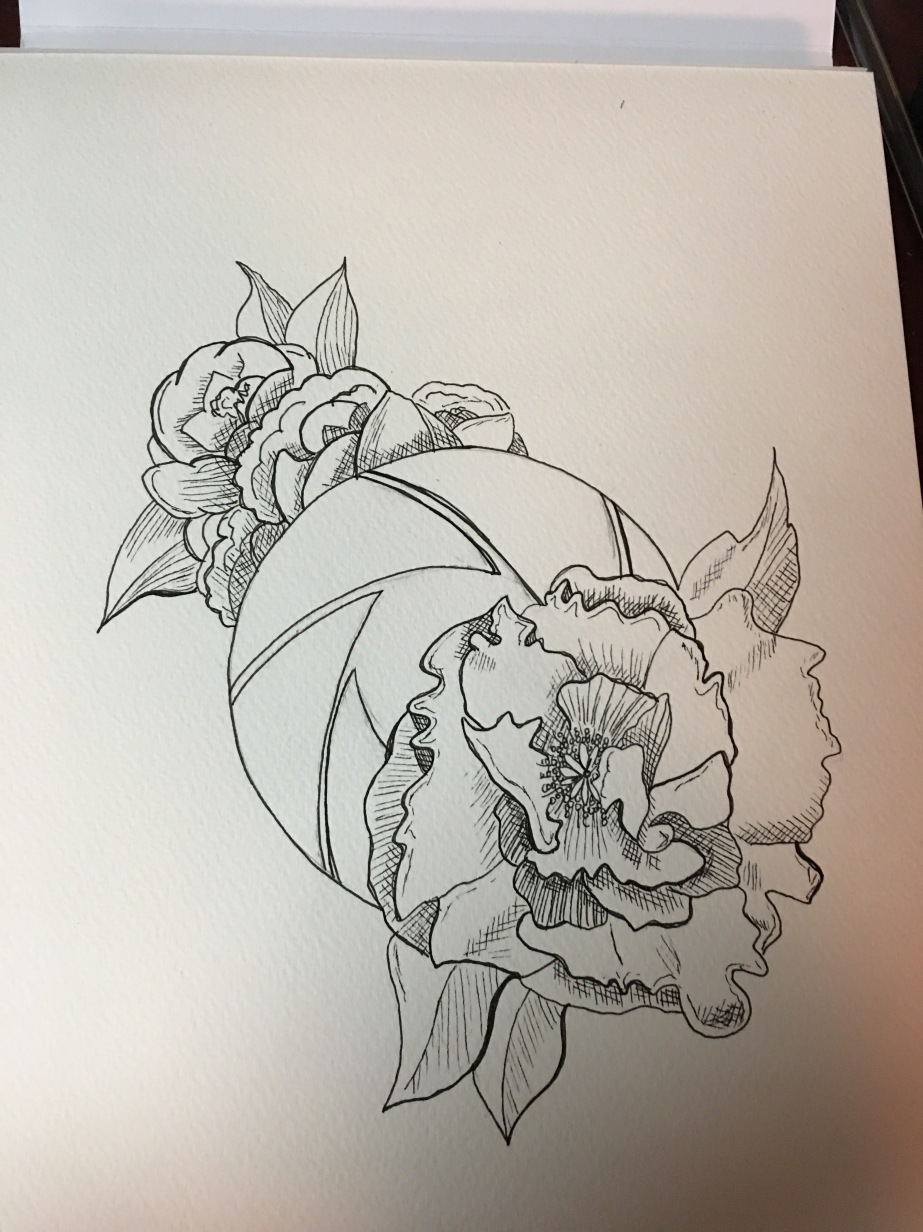 First washes in the petals: 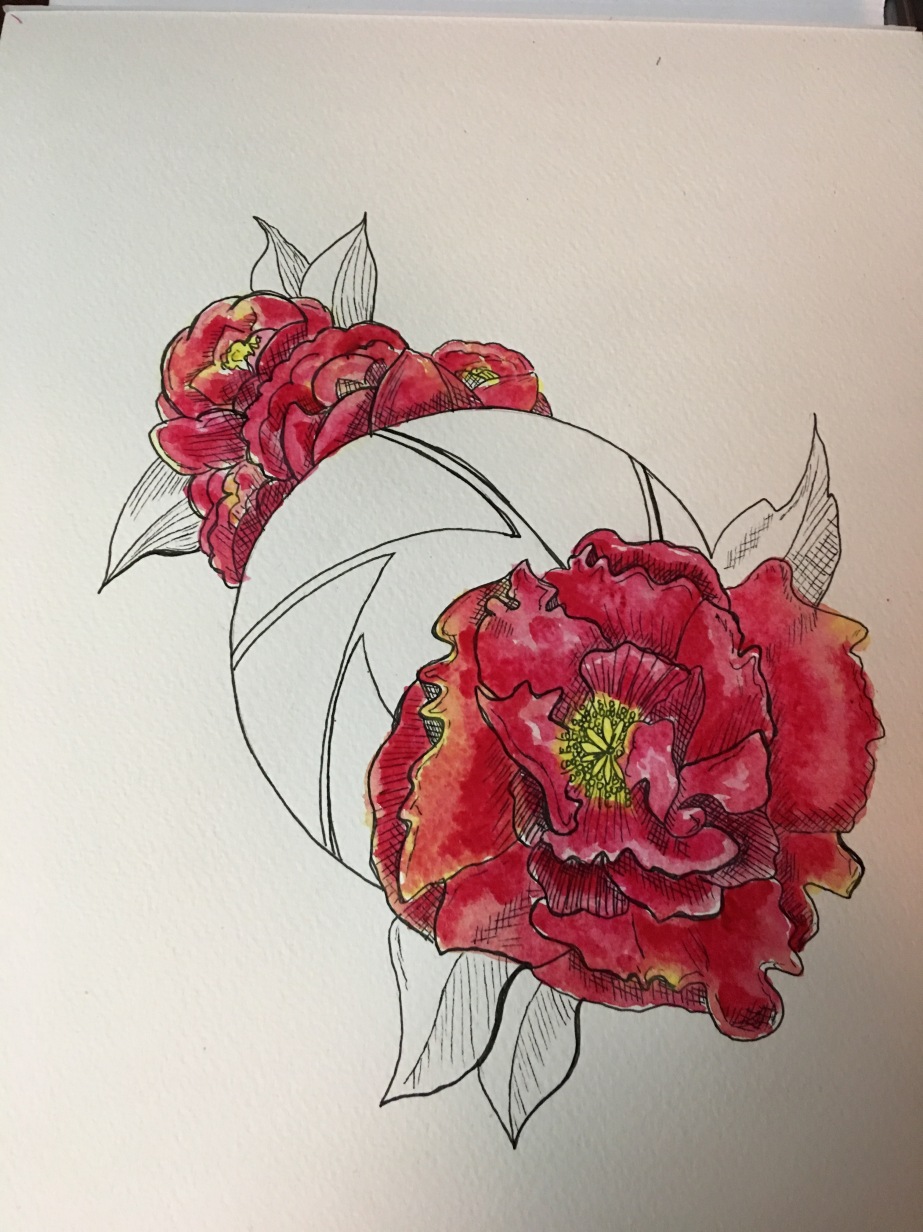 Hopefully I’ll be finishing this up tonight! The final print will be available in my Etsy shop as well!

The wisdom of the owl is a legend dating back to the Greco-Roman era and the reference seems to be made in popular culture quite often. Not only are these beautiful creatures known to be wise, but are often misunderstood as well, because they are nocturnal and live in the dark, they have been associated with witchcraft and black magic. I mean who has ever watched a movie and someone is lost in the ominous woods with the tell tale owl hooting and the character is either afraid or foreshadowing shows something bad about to happen. Owls have also been associated with bad luck and bad omens. I don’t believe any of the bad things said about owls because I enjoy photographing, drawing and watching them! The association reminds us that sometimes things are not what they seem and if you are kind to the owl she will share her wisdom and beauty with you as everyone thrives together.

To err is human, but to find a solution is wise like the owl. 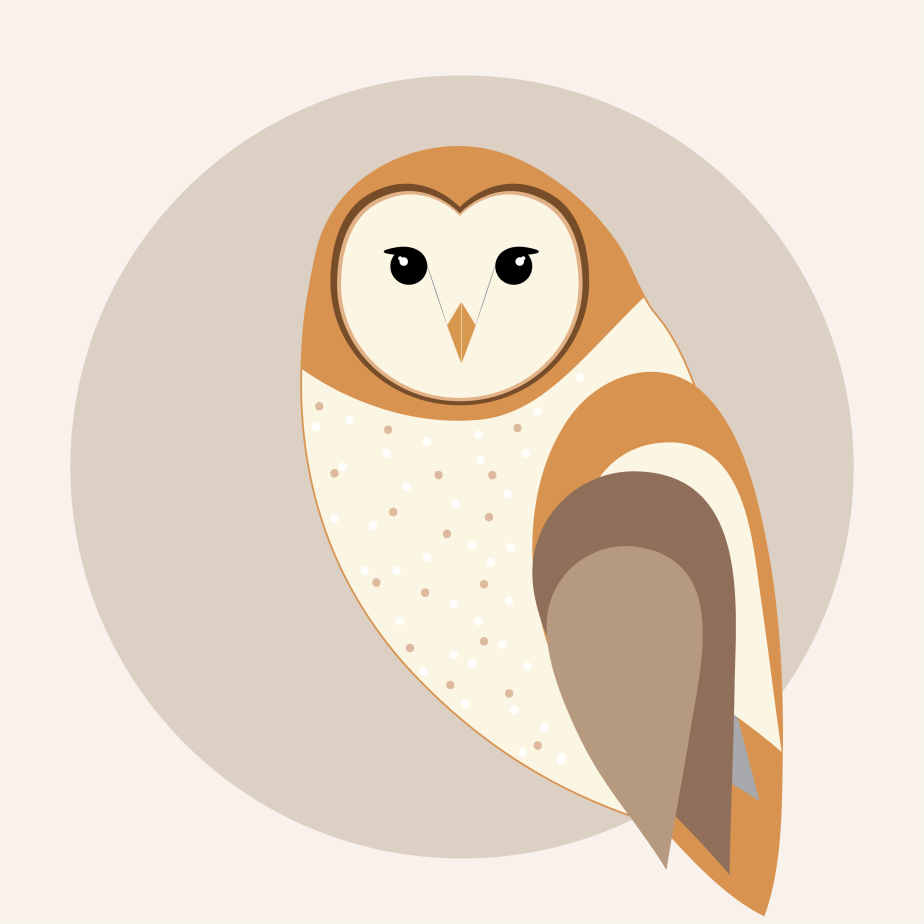